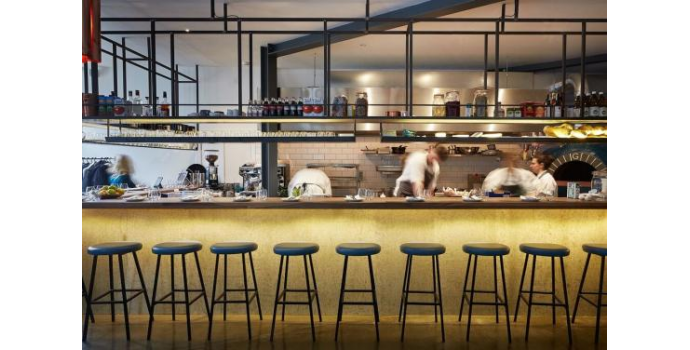 Considering she’s never had a restaurant before, Selin Kiazim has done well to become something of a hot property in foodie circles already.

The Turkish-Cypriot chef worked with Peter Gordon at both The Providores in Marylebone and Kopapa in Covent Garden before leaving to open her own spot.

She ran a number of residencies, including at Soho’s Embers Yard and Trip kitchen in Haggerston, before finding the right site and launching Oklava.

A large open kitchen flanked by dining counters dominates the far side of Oklava’s light and airy space, while deep turquoise seats and a gold-tinted bar allude to the opulence of the Ottoman empire that’s captured in many of the spice-laden dishes.

There are plenty of small touches which add extra flourish — from a decadently tiled pizza oven (or should that be pide oven?) to fresh flowers in the toilets — while a wall-dominating wine rack signals a seriousness when it comes to drinks.

The menu sees Selin equally put her own stamp on classic dishes and use traditional Turkish and Cypriot flavours to assemble new ones.

These are divided between a few ‘snacks’ and then numerous options under ‘vegetable’, ‘pide’, ‘seafood’ and ‘meat’ sections. They are designed as small plates and are ideal shared between the table — at every turn, layer-upon-layer of spicy, sweet and savoury notes combine in an almost whimsical, mystical fashion.

A braised octopus pide topped with ricotta, green olives, pickled caper shoots and thyme is a tangy, vibrant take on a Turkish pizza — its array of flavours made all the spikier for a bowl of pickles to wrap up with it. The list goes on and there’s barely any respite from the bold flavours, let alone low points.

A short dessert offer includes a twist on rice pudding that sees it topped with a brûlée crust and rum jelly; a chocolate, prune and cardamom delice; and a pistachio sponge served with caramelised white chocolate and soft, barbecued quince.

Raki and a couple of Turkish beers feature as an aside to a near 20-strong list of Turkish wines. Prepare not to have heard of a lot of these, but decent tasting notes and very well versed staff are on hand to enlighten. It also helps that they are all available by the glass and carafe as well as bottle. Bottle prices start at £24 and rise to £66.